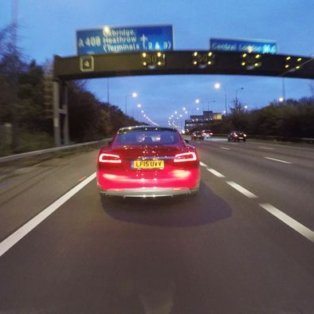 I spy with my little eye something beginning with T.

Ever since our holiday to Oregon and California a couple of years ago, I’ve become a bit obsessed with spotting electric cars. It started off as a fun game to play on our long car journey, but as we drove south towards San Francisco the number of plug-in vehicles rose so much that it became hard to hold a conversation without my shouting out “Leaf” or “Tesla.” Two years later and despite trying to stop, I’m still playing the game. It seems that even without trying, my brain can now spot electric vehicles effortlessly from the corner of my eye, by the whirr as they pass by and from a distant headlamp on a country road.

Some part of my brain that is presumably supposed to spot potential prey seems to have been re-purposed for spotting electric vehicles. I have to ask myself whether this has become an unhealthy obsession, but when explaining it to a friend recently after pointing out a Tesla driving past her house, I realised that my excitement is not entirely pointless. I see electric vehicles as symbols of hope and optimism. At a time in history where it’s looking increasingly likely that our addiction to fossil fuels will devastate our species and planet within a few generations, electric vehicles are a visible sign that alternatives are available and maybe, just maybe, we could create a sustainable future after all.