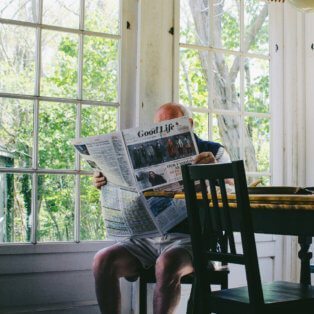 We recently had to set up a pension scheme for the employees in our business, and it got me thinking about how we’re going to provide for ourselves in our old age, and about the concept of pensions in general.

It didn’t take much analysis for me to realise that our cultural idea of pensions simply doesn’t add up. Let’s say, for example, that a person pays into a pension between the ages of 25 to 65, and is paid a pension from age 65 to 85. Pay in for 40 years to create enough income to live for 20 years. Immediately it’s obvious that it would take a huge proportion of income during one’s working life to pay for this.

Will costs really reduce in our old age?

Some might argue that living expenses will be lower when we retire, as we have hopefully paid off mortgages and kids (if you have any) will probably have left home. For many people this is true, but there are also strong reasons why living expenses would increase in older age. For example, older people might need to pay for more medical care and assistance, which can be hugely expensive. Not just that, but the value of money typically goes down drastically over the long term, meaning that your savings shrink over time even if you don’t spend anything. This is partly because governments and banks continue to create more money, pushing down the value of existing money, and because cost of many things will inherently be pushed higher as natural resources decline and the human population increases.

Without inflation and assuming we need the same income, we have a situation in which we would need to pay a third of our income for most of our working lives in order to be able to sustain ourselves in retirement. If we factor in rising prices, then the amount we need to pay in becomes far higher. So, on the surface, pensions simply don’t add up.

This inherent flaw in the pension system is solved by a little bit of black magic, aka investment. The idea is, that if you invest in the right companies and commodities, then their value of these entities will rise far more than the amount by which money goes down in value over the same time period. The theory is that money invested wisely will multiply itself. This, for most people, is an acceptable explanation of how pensions work.

However, although this might work for many, there are some serious flaws. There are the ethical issues of investment that I have written about previously, but even if you don’t care about that, there is a harsh reality that in a world where money is going down in value, investments can only rise significantly in value for a lucky few. It’s a scheme that works well for a wealthy minority, but inherently cannot be scaled to work for everyone.

Scaling investments for everyone

This is the problem with state pensions and the government’s new auto-enrolment pension scheme, which aim to ensure that everyone in society has a pension. If somehow this is possible, it would only be in the event that investment markets overall significantly outperform the decline in the value of our currency. Such performance in the investment markets however is fundamentally unsustainable, because eventually the value of the investments would exceed the actual amount of money in existence.  This might work for a little while, but the bubble will eventually burst and create financial chaos, mainly for the poorest in society.

Cultural solutions to fund our retirement

What I’m describing is not just a flaw in the concept of pensions, but a flaw in the lifestyles that we are developing as a society. We believe that we can all put a small proportion of our income into a magic box, and then have others pay us money for doing nothing when we stop working. It’s an appealing proposition, but also an unrealistic one.

The question is, how will we survive financially in our old age?

I can think of a few options that require us to adapt our culture and lifestyles: