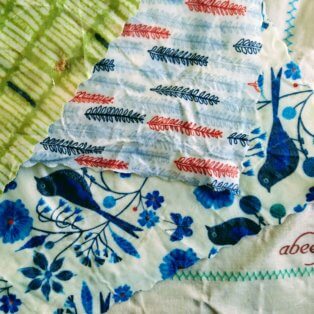 Despite that, I’ve been using cling film all of my life for the same reason as most other people. It’s just incredibly useful.

Last year, a friend surprised me by giving me a set of Abeego for my birthday. At first I didn’t really understand what it was, but then he explained that they are reusable food wraps made of cotton canvas and beeswax. You can soften them up by warming them in your hands, and then wrap your food like you would with cling film. I loved the idea and used them occasionally, but somehow my cling film addiction continued. Not knowing that I already had some of these wraps, my parents bought me a set of similar beeswax food wraps from Byron Bay in Australia. These ones even had funky colourful designs, and a wider range of sizes. Nevertheless, my cling film addiction continued.

However, everything changed one day when we finally ran out of cling film, and my beeswax wraps came to the rescue. From then on, they gradually became a part of daily life. As I used them for an increasingly wide range of food applications, I realised just how fantastic they are. It’s a year later now, and we haven’t bought any cling film, and haven’t missed it at all.

I really think that this is a product that every family should have, especially those who currently wrap their children’s school lunches in cling film. This is a rare, fantastic example of sustainable design, and it really deserves to become mainstream. Of course, some people will be uncomfortable with the fact that it’s made from beeswax, but I’m sure that it would be possible to formulate a version that uses vegetable wax instead.

I’m also not aware of a local, or even European manufacturer or supplier of these types of product. The two sets that I have were purchased from Canada and Australia respectively, so maybe there’s an opportunity to create a British made version using sustainable materials, and stunning graphic designs to make lunch boxes healthy, fun, and environmentally responsible. Hmm, if only I had the time.