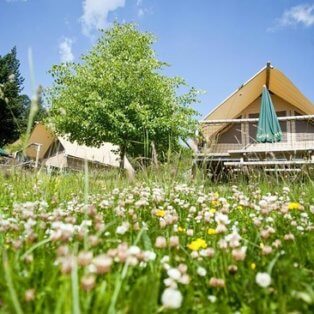 Since the family holidays of my childhood, visiting campsites in France and Italy, I’ve been fascinated by the fact that people are much friendlier to each other on a campsite than they are at home with their neighbors. You can live across the road from someone for years and not know their name, but be on first name terms with people on neighbouring tent pitches in no time.

Why are people more friendly on campsites?

I think this partly stems from the fact that camping inherently encourages people to spend more time outdoors, making it harder to hide away, and possibly because people are more open and relaxed when they’re on holiday. However, I’ve felt for a long time that there’s something inherently positive about the design of many campsites that would translate into more friendly, healthy, and safe communities if we applied some of the same principles to the way that we design our towns. The main themes that I’ve identified are:

Although caravans have some of their own facilities, all campsites have communal washrooms with sinks, toilets, laundry facilities, and dish washing areas. In many cases, they also have shared recreational facilities, such as swimming pools or outdoor sports courts. This means that it becomes almost inevitable that you will bump into others in the community several times a day, leading to increased likelihood of conversation. In contrast, our homes are self-contained and we don’t need to use any of the same facilities as our neighbours in our day to day life. Of course, we’re not going to persuade many people to share toilets and showers, but there may be a mix of utilisation, utilitarian and recreational facilities that could be designed into new residential streets.

Sharing with our neighbours

For example, instead of each house having a garage or shed with its own set of tools that hardly ever get used, the street could have a communal shed housing garden tools, DIY tools, and lawnmowers for residents to use, alongside plenty of racks for people to store their bicycles. In addition, outdoor cooking and eating areas could foster a sense of community and encourage people, weather permitting, to spend time in the fresh air in each other’s company. And of course, other outdoor facilities like children’s play equipment or community orchards or veg patches would also be beneficial in cases where space is available. Possibly the most significant facility of all, however, is a community car park. Just like on some campsites, residents would have to leave their cars at the edge of the community zone, meaning that they would have to walk out of their homes past their neighbours to get to their cars each day.

It would mean that they always get at least a tiny bit of fresh air and exercise, and would be likely to meet their neighbors on a regular basis. What’s more, by forcing people to leave the house without their car, they’d be more likely to continue their journey without it. Just like on campsites, residents would be allowed to bring their cars close to their homes when required for unloading, but a very low 5 or 10mph speed limit would ensure that it was always safe for children to play on the streets. The final piece of the puzzle is minimising physical barriers between each home. Camping pitches usually have no barriers between them, making it hard for people to hide away from each other outdoors. At home, there are times when some people want privacy, such as when they’re sunbathing naked in the garden, but this isn’t necessary most of the time. A solution could be to give houses bigger front gardens than back gardens and restrict the height of fences and hedges to about 1 to 1.2 meters in the front garden. This would give people the needed privacy in the back garden, but encourage them to spend time in the front garden where they can see and interact with their neighbours, as well as people utilising the common areas.

When all of this is combined we would have communities that, much like campsites, encourage social interaction and outdoor activity by their very nature.

I wrote this post on holiday, where I saw some fantastic examples of elements of this at work. First, on the banks of the Rhine in Basel, which has been designed as a communal recreation area to encourage swimming in the river. Ample seating and space for picnicking, electric and coal barbecues for public use, showers and exercise equipment. It’s implemented at a city level rather than on the scale of an individual street, but it powerfully demonstrates the power of good urban design to bring people together in shared spaces to enjoy the outdoors.

We then travelled to Haus Sonne in the Black Forest, where we had breakfast and dinner each day in a shared dining room with other guests, just like on a campsite. It resulted in us talking to other guests in a short space of time, and that was despite the language barrier. A shared dining room isn’t a practical proposition for a typical street, but it demonstrates the point that if you can find ways to regularly get people into the same spaces, then they will end up talking and getting to know each other before too long.

Our host at Haus Sonne, Christian Leppert, suggested that we visit the district of Vauban in Freiburg in Breisgau, which is renowned as an example of excellent green building design and urban planning. When we arived in Vauban, one of the things that excited me most was that despite being a fairly dense urban area, people were relaxed and friendly walking and cycling. The streets are almost all pedestrianised and vehicles can only use them for loading and unloading, or else they must park outside in the shared solar garage, or on the main road. This makes the streets quiet and safe for cycling, walking, and for children to play. Each set of buildings has a central recycling area and some outdoor space with a variety of uses, such as gardens, vegetable patches, and play areas. These small but thoughtful details turn apartment living into leafy village life.

Will it only work for new-build developments?

Vauban is a fantastic project and there are no doubt others that successfully demonstrate some of these concepts, such as Hemingway’s Staiths South Bank development and Poundbury, but these were new developments, designed with some of these principles in mind.

Could these principles be applied to existing residential areas? There is certainly an opportunity to make better use of outdoor spaces and to distribute them evenly through towns where possible, however to do it properly could be tough. As a thought exercise, I took my own street as a sample. It’s a cul-de-sac with about twenty houses, and so probably easier than your average residential street. However, it quickly became apparent that although there is enough combined land area to do something interesting, the current positioning of the homes and the plot boundaries makes it almost impossible to really implement the campsite concept to its full.

Each home would need parking for two cars, meaning that a car park for forty plus cars would be needed. In the new development, each house would not need a driveway so the plots could be slightly smaller, creating space for the shared car park, but in the current scenario there would be nowhere to put the car park without knocking down at least one house. Perhaps we could reconfigure the street a little to include a small safe area for children to play, but even that could be a challenge. Perhaps the best that we could do would be to level the pavements with the street using the ‘Shared Space‘ principle and mark the whole street as a pedestrian zone with a 5 to 10mph limit for cars that did need to enter. This could make the street feel wider and safer, and encourage people, especially children and the elderly, to get out more.

In reality, I think that the campsite design concept should be at the heart of all new residential developments, but probably isn’t viable for most existing streets. However, even implementing one or two small ideas into a street could improve quality of life for its residents.