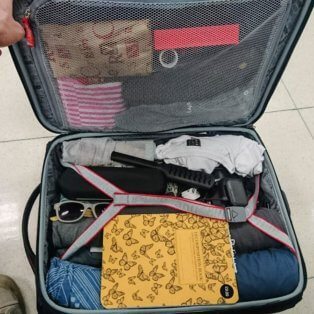 The benefits of travelling light

We visited my parents for a night before setting off on our holiday to Thailand and Australia at Christmas, and I was feeling rather pleased that Vineeta and I had both managed to pack for a three week holiday in one small hand luggage sized suitcase each, and that we even had space to spare.

We weren’t scrimping either as we both had two pairs of shoes, enough clothes for a week, Christmas presents for our family in Australia, rain jackets, books, and I had my DSLR camera. It wasn’t so difficult to achieve. All we really did was ask ourselves tough questions about what we really needed, rolled our clothes tightly, selected more space efficient clothing, such as minimalist footwear, and wore our bulkier items, such as jeans and a jumper for the plane journey. Not such a brilliant idea?

My Mum, however, was not so impressed. In fact, she found the idea of not taking a big suitcase so ridiculous and hard to compute that I thought her brain was about to explode. Apparently, instead of impressing her with our efficiency, we had once again demonstrated that we are a pair of weirdos who can’t do anything like normal people. Our plan was foolish and she didn’t want to hold back in letting us know it. I tried to justify the benefits but I was so taken by surprise that I couldn’t actually remember why we had decided to travel light.

The pro’s and con’s in hindsight

Now that I have completed the trip and am back home, however, the practical benefits are thankfully reminding me that we did have some good reasons. So here goes.

Those are just a few of the benefits that I experienced after a few days on this trip. The only downside seemed to be that you can’t take liquids over 100ml in your hand luggage on a plane, but that’s hardly a deal breaker.  Overall, I can honestly say that I enjoyed my holiday more because I carried less.

It wasn’t the first or the last time

Actually this isn’t the first time that we’ve travelled light.

The first time I ever tried was a few years ago when I took the train with a friend to Yorkshire to run a half marathon. I took everything I needed for a weekend away plus running gear in a small day rucksack. Yes, it was tight but it worked perfectly and I didn’t feel that I missed anything. Then we went for a three week holiday to America and packed everything we needed, including both hot and cold weather clothing into our hand luggage.

Since then, with the exception of travels by car in which we tend to treat the car as our suitcase on wheels, we’ve not been on a trip with more than a small hand luggage size case and a small rucksack each.

Travelling light makes travel easier and less tiring both physically and mentally. Now I’m wondering what it would be like to go away with no luggage at all.