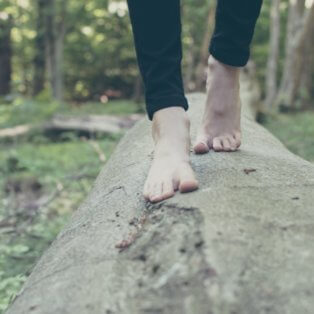 Several years ago, I got a few verrucae. And by a few, I actually am embarrassed to admit, I mean six.

There was no real mystery to this. A few months earlier, I got lost in the forest and waded through a swamp with bare feet, picking up a collection of micro splinters in my feet in the process. I got most of them out, but a few remained. They must have got infected because the verrucae began to grow in those exact locations.

Looking on the bright side, this presented me with an opportunity to experiment with a variety of methods to cure them naturally instead of burning them off with a chemical treatment from the pharmacy. So here goes…

Treating a verruca with garlic

First up, I decided to try treating the verrucae with garlic. I didn’t really research this, but had heard that garlic was used by the Romans to prevent foot infections, so I figured it might be worth a shot.

My method was to cut a thin slice of garlic, crush it to release some of the juice, cover it with a tiny piece of cotton wool and then tape it over the verruca with surgical tape. I would try to keep it on for about 16 hours a day, giving my feet some time to breathe for a few hours in between. During these breaks I would also file them down daily to remove as much dead skin as possible in the hope that I could get the garlic juices closer to the heart of the verruca.

The result was impressive. One of the verrucae was gone after two weeks, and another within three weeks. So garlic really can cure verrucae. However, it wasn’t perfect. The other verrucae proved more persistent, and I struggled to get rid of them with the garlic. This was partly due to a couple of side effects that I had experienced.

The first side effect was a garlicky taste in my mouth that appeared after a few days of having garlic taped to my feet. I could tolerate it for a while, but despite my wife reassuring me that she couldn’t smell it on my breath, it started to make me feel a bit yucky. It seemed to intensify over time and I could only take it for so long.

But lets pause to acknowledge what was happening here. Garlic taped to the bottoms of the feet could be tasted in my mouth, demonstrating that it was entering my blood stream and travelling throughout the length of my body. That’s fine with garlic. But when you decide to use a toxic chemical to bazooka your verruca, presumably, it’s also being absorbed into your bloodstream! This seemed to me like a pretty good reason to persist with the search for a natural verruca cure.

The other side effect was more serious. The soles of my feet would only tolerate direct contact with raw garlic for a few weeks before they would become sore and start to blister. Which meant that I was not successful in curing the other four verrucae with the garlic.

Treating a verruca with duct tape

I then read on the Internet that some people had cured verrucae by covering them with duct tape to starve them of oxygen. I have to admit that having just discovered that garlic on the feet gets absorbed into the blood stream, I did have some reservations about extended exposure to duct tape glue, so I’m not quite sure why I even tried this one.

I did try it though and it was unsuccessful despite several weeks of persistence. However, I did find that the verrucae didn’t seem to grow any bigger when they were covered over with the tape.

This turned out to be really useful as this experiment went on. There were times when I wanted to take a break from my experiment but didn’t want to lose any progress made up to that point. For example, in going on holiday, or when I was just fed up with the whole thing.

Treating a verruca with a needle

Another method that I found reported online, was poking a needle or pin into the head of the verruca. This seemed like an unlikely solution because I couldn’t see a clear mechanism of how this could help. However, it seemed like a quick and easy thing to try so I sterilised a needle and tried it on the remaining verrucae. No surprise that it was quite painful and really didn’t seem to have any effect.

Treating a verruca with clove oil

Next up, clove oil. Clove oil is reputed to be good for treating tooth infections, so I figured that it might be good for verrucae as well, since Verruca are a type of viral infection. My method was to soak a tiny piece of cotton wool (about 6mm diameter) in a few drops of clove oil and then tape it onto the verruca with medical tape.

I did this for the remaining four verrucae and although it was slower than the garlic, it did work. They all began to shrink within a few days and two of them were gone within about five to six weeks. The other two shrunk to the point where they were almost gone but they simply would not progress any further, even when I persisted for a couple of months. I eventually gave up and took a break from my experiment for a while because I was a bit tired of it by this point.

Treating a verruca with Green Tea

I demonstrated that both garlic and clove oil could cure verrucae, but that some verrucae were strong enough to resist both of those treatments. I needed a new approach. That’s when I stumbled upon an article that stated that green tea was effective at treating vaginal infections, and more significantly, it was the same type of virus that causes verrucae, the human papilloma virus (HPV). So if green tea could fight this virus in one part of the body, perhaps it would work in another.

A more practical problem was figuring out how to actually administer green tea onto my remaining two verrucae. The method that I devised was to buy concentrated green tea extract tablets and crush them with a pestle and mortar to make them into a powder. I would use one tablet per verruca per day, mixing the powder with a pea-sized blob of Aloe Vera to make a cement that I could paste over the verruca.

I would cover over the cement with a bit of kitchen towel, and then tape it over with surgical tape. The result, this was undoubtedly the best treatment that I had tried. Not only did it cure the two most aggressive and persistent verrucae, but it did so without any noticeable side effects. Yes, it took a few weeks for each verruca, but it was no bother during that time. And unlike conventional treatments, this was nourishing my body with goodness.

There was only one catch. In this process of curing the last two verrucae, I discovered that the largest of them was actually two verrucae very close to each other. this only became apparent during the healing process as the two separate heads revealed themselves. So actually there were three verrucae and the green tea only eliminated two. There was one more to go!

Treating a verruca by grounding it

There was one verruca that managed to survive all other attempts. Even if I could shrink it to the point where it has almost vanished, it would never go away entirely. Things dragged on for a long time (I’m talking years) and eventually I relented and decided to just bite the bullet and try the chemical solutions from the pharmacy. I tried Bazuka Extra Strength several times with no effect and I tried freezing it a number of times, but it survived everything. This one was a beast!

So I took another break for a long time and just lived with it. It was there in the background and I could feel it every day when I walked. One day, for a reason totally unrelated to the verruca, I decided to move my grounding mat from the top of my desk to the floor under my desk. A couple of months later I was walking around the house and suddenly noticed that I couldn’t feel the verruca for the first time in years. I lifted up my foot to look and couldn’t believe it. The verruca was gone.

This could be pure coincidence, but its certainly an interesting phenomenon. Its been nearly a year since and it hasn’t come back. I had been sitting at my desk working all week every week, with bare feet on this mat connected to the earth, and the verruca that seemingly nothing could cure had vanished.

This very long and drawn out experiment turned out to be quite fascinating. It reinforced my belief that there are two ways to treat disease. Instead of attacking the disease with chemicals or physical violence, we can take the opposite approach and nourish the body to strengthen its own natural defence mechanisms, enabling it to heal itself.

This has led me to hypothesise that it may be possible to treat verrucae with other forms of nourishment that can be effective against viruses such as vitamin therapy. For example, perhaps we could treat verrucae if we had a method to apply vitamin C directly onto a verruca. If I ever get another verruca, I may well give this a go to see if it has any effect.

A final note on filing off dead skin

With garlic, clove oil and green tea treatments, I followed the same approach of applying the substance most of the time, but having a few hours each day in which I would allow my feet to breathe. During this time, I would file down the skin on the soles of my feet to remove any dead skin that may be acting as a barrier between the applied treatment and the verruca itself, that goes deeper into the skin.

I believe that this daily filing was an important part of the treatment. The easiest way that I found to do this was with a Scholl electric foot file. It isn’t eco friendly, but it really does work, and allows you to file skin quickly and precisely.

One word of caution though, is to stop filing as soon as you can feel any kind of soreness. As soon as you feel even a tiny bit of soreness, it means that you’re either pushing too hard or you’ve removed all the dead skin, and now you’re filing living skin. If you keep going, there’s a risk that the verruca will start bleeding a tiny bit, as I discovered on more than one occasion.

And no, if you make the verruca bleed like this, it doesn’t kill the verruca. It just sets back your treatment by a few days, as you have to wait for this tiny wound to heal before you can resume your other treatment.

So my advice is to file daily, but play it safe and don’t go too far. If in doubt, stop. After all, you’ll have an opportunity to file it again tomorrow, and my experience showed that trying to rush progress only ever slowed things down.