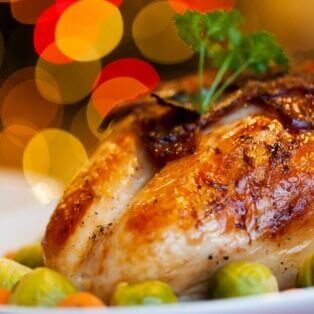 What is the most sustainable diet?

In the latest issue of Positive News, Tom Lawson writes an article titled “Chewing the facts.” He presents the argument that in pursuing a diet that is less environmentally damaging and compatible with the world’s growing population, we need to think beyond vegan.

Even though numerous studies have now shown that plant-based diets are significantly less destructive than diets containing animal foods and even though the UN has stated that “we need a global shift towards a vegan diet”, he argues that this might not be correct. His logic is that by being dogmatic about a vegan diet as the best diet for the environment, we may sometimes miss the opportunity to make even more environmentally friendly choices that actually do contain animal products.

It is an interesting perspective but his examples are somewhat unconvincing. For example, he states that a local organic egg might be more sustainable than non-organic, plastic packaged foreign almonds. This is possibly (but not definitely) true, but also probably irrelevant because few people would ever be in a scenario where they would choose between these two foods. They’re simply not connected.

The article raises the fact that there are many more environmental issues associated with food including plastic packaging waste, water consumption, palm oil and soya plantations, and it indirectly implies that these could be reasons that make plant foods less sustainable than animal foods.  But what is the basis for this implication? If anything the implication should be the opposite.  Plastic packaging has little relevance to whether something is plant or animal based, other than the fact that for hygiene reasons animal foods are almost always packaged in plastic, while plants can in some cases be sold with little or no packaging at all.  Many studies (as evidenced by the infographic alongside Lawson’s article) show that as a general rule, animal foods are far more water intensive than plant foods.  Palm oil is frankly irrelevant because its use is not related to whether someone eats vegan or non-vegan, and soya plantations (destructive as they may be) primarily produce food to feed to animals.

He also states that animal foods can be farmed on hillsides where plant foods can’t be grown. Of course, plant foods are actually grown on steep hillsides in many parts of the world. Even if this were not to happen in the UK due to the costs of doing so, it doesn’t change the fact that farming animals on hillsides is incredibly inefficient and has been hugely destructive in areas such as the lake district. It would be far more environmentally friendly to re-wild these huge areas of hilly land and use a smaller area to grow some extra plant food on flatter ground.  In fact, we wouldn’t even need to use extra land because a reduction in animal consumption would free up huge amounts of crop land that can be used to grow food for humans.

To take the biscuit, Lawson then argues that by telling the world that it needs to move towards a plant based diet, we are ignoring important cultural values such as the desire of British people to eat Turkey at Christmas.  Really?  I don’t think that our cultural desire to eat meat is really a scientific environmental factor.  It is particularly irrelevant when you consider that culture changes constantly and that the foundation of a sustainable future is deep rooted cultural change.  Besides, eating Turkey for Christmas wasn’t even common in the UK until the 50’s, so if it can change one way so quickly then it can surely change again over the coming decades.  Not to mention that if we are going to stray off the environmental issues and explore the other impacts of diet, then surely the issues of human health and animal welfare are far more important than whether we can gorge ourselves on a dead Turkey at Christmas.

In general, I think that the Positive News article is written more like a list of excuses for people to eat animal products than as a solid argument against aiming for a plant-based diet.

Having said that, I do actually think that Lawson is right about there being some edge cases in which animal foods could be more sustainable and about the fact that there may be scenarios in which some people need to eat animal products to survive. It is partly for this reason that I personally don’t like to call myself vegan, but instead prefer to simply state that “I try to live a vegan lifestyle” or that “I try to eat a plant-based diet”. I believe that being dogmatic about things is rarely a good thing, that every situation in life is different and that we should be honest with ourselves that we don’t always make perfect choices.

So despite my criticism, I don’t actually disagree with the core argument of Lawson’s article.  My point of frustration is actually with the fact that the argument is framed in a way that places too much emphasis on the exceptional cases, implying that they are far more common and more significant than they really are.  When the science says that as a general rule we need to move towards a plant based diet, telling people that plant foods are not always best for the environment is not a smart move. It might technically be true in a small minority of scenarios, but in reality people are much more likely to use it as an excuse to consume more animal products than as a reason to make truly sustainable choices.

If we want to encourage people to eat more sustainable diets, then we should not lose sight of the big picture. We need to avoid any complication, minimise confusion and present the simplest, most effective message that applies to the majority of people in a majority of scenarios. That message, as Tom Lawson states himself, is that we should be aiming to consume a plant-based diet. Promoting messages to the contrary will, in practice, do much more harm than good.