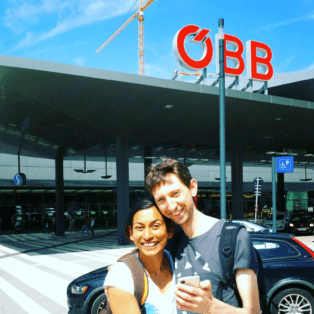 We should be travelling in Europe by train, not plane

One of the challenges that I’ve set myself in order to help reduce my impact on climate change is to find ways to travel long distance without flying and where possible to do so using only electrified transport. Of course, the most eco-friendly option would be to avoid long-distance travel all together, but I’m not yet ready to do that and I justify it to myself by thinking that I can have a greater impact by demonstrating the alternatives to flying than by staying at home and feeling frustrated that I’m missing out. We’ve done several trips abroad in our electric Renault Zoe and had a great time, but they were holidays that either were not too challenging in terms of time and distance.

However, last month we had two conferences to attend for our business; one in Antwerp and one in Vienna. These presented some new challenges, because the Antwerp trip required us to get there and back quickly, while Vienna was much further away than we had ever been in our Renault Zoe. In both cases, the frequency and duration of charging stops for our Renault Zoe was prohibitive, and so we looked at the option of renting a Tesla. This would give us the freedom that we love from car travel while shortening our journey time significantly. Also, as these were business trips, it would be possible to hire a car on business expense, reducing the cost significantly.  Despite this, even when factoring in three or four staff members on each trip, the rental cost per person for the Tesla was really extravagant and so with a little bit of reluctance, we decided to go by train.

I was worried that long distance trains in foreign countries could be boring, confusing and stressful. However, in both cases, Vineeta and I were pleasantly surprised. We genuinely enjoyed the journey and arrived surprisingly fresh. We actually took a slight detour to Prague on our way to Vienna, and despite the extra distance it was still a really easy journey, especially when factoring in that a big section of it was on an overnight sleeper train. Not only had we travelled from our home in a New Forest to Prague and then Vienna powered entirely by electricity, but we had arrived relaxed and gained a better sense of where we had travelled than if we had just popped up at an airport. This got me thinking. If this is a viable option for these two business trips, what is the excuse for taking the plane? Especially for well-educated, young professionals who should know about the risks of climate change and who will almost certainly be affected by it in later life. I’m not trying to be judgemental, because until this trip I have been in exactly that group of people.  I’m simply trying to understand why our generation is so addicted to flying, even when viable alternatives already exist and even when we know better.

The reasons seem to be as follows:

There’s no doubt in my mind that flying, especially within Europe, is way too cheap when you factor in the environmental impact. But there is a perception that flights are eve cheaper than they really are thanks in part to the heavy marketing of “cheap flights” and the fact that British trains tend to be disproportionately expensive.

However, when travelling long distance in Europe the cost advantage of the flight is not as good as most people would assume. For comparison, a return flight from Southampton to Vienna was available for about £250 pounds including taxes (or only about £160 from London), whereas the equivalent journey on the train cost only £195.   Of course you can sometimes shop around for really cheap flight deals, which isn’t so possible with the train, but in this case the train actually works out cheaper, not to mention the fact that you don’t have the cost of getting to the airport.

We actually paid more for our train tickets because we took an overnight sleeper to Prague, but that cost can be offset against the cost of a hotel.

So the idea that trains are too expensive is more of a myth than a real issue and my guess is that most people who can afford to fly to Vienna could afford to go by train. There’s no getting away from the fact that it does take a lot longer on the train.  The train from Southampton to Vienna takes about 23 hours whereas flying takes just under 4.  However, when you factor in option that the plane requires you to travel to and from the airport at both ends and check in 2 hours before take off, the real time on the plane is nearer 8 hours.  Then if you factor in that you can take the overnight sleeper train, you can do 8 hours of the journey in your sleep, meaning that the train only takes 8 hours longer than the plane in terms of waking hours spent travelling.  OK, that is still twice as long, but much better than 6 times as long as it appears at first glance. Then factor in that trains are comfortable and that many trains and stations in Europe have Wi-Fi that allows you to work, then the time penalty is actually much smaller than it appears.

The truth is that train travel around Europe on many routes is actually very fast, but our generation has been conditioned to believe that we should be able to get anywhere on the continent within just a few hours. I don’t think the speed of trains in most cases is the real problem, but instead the problem is our distorted perspective of travel and our culture of instant gratification.  If only we could take a step back and appreciate the journey, I think a huge proportion of people would find that they do actually have the time to go by train. It’s definitely true that it’s much easier to book a flight between two cities in Europe than to book a train. Websites like seat61.com are hugely helpful, but the fact that they exist highlights just how complicated it is to plan international train journeys. However, for many routes, this has now being solved by the fantastic website loco2.com, which is coming close to its ambition of making it as easy to book train tickets around Europe as it is to book plane tickets, so I’m delighted that this excuse for travelling by plane is rapidly evaporating.

Perhaps the biggest issue is that people are simply not aware that alternatives exist, and that we live in a culture where jet-setting is glorified as the fast, modern way to travel and trains are looked down upon as slow and old-fashioned. Planes are for people who are young and free, whereas trains are for people who are old and stuck in the past. The irony is that unless those of us who are young and free change our attitude and embrace land-based travel as the future, then there is a serious risk that we may not have a positive future to look forward to at all. I think we need to educate ourselves, lead by example, and each play a small part in creating a positive cultural change. We can do this as individuals, but also events such as WordCamp Europe that we attended in Vienna should play their part by promoting sustainable transportation methods rather than actively promoting flying.

The bottom line is that, in many cases, flying can’t really be justified for European travel and the reasons that most of us give are little more than excuses, so if I’m going to fly again within Europe, I’d better have a damn good reason.