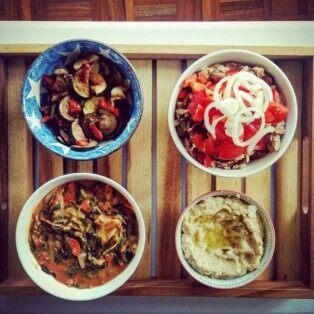 A Middle-Eastern Feast for Eurovision 2016

Every year, Tom and I enjoy assembling or cooking up a feast for Eurovision song contest and then graze through the evening on it. This year, I decided to surprise Tom will a lebanese/middle-eastern/north-african feast. It was a delight! This is how we did it! We’d recently enjoyed eating a great meal at Palmyra’s in Kew. This gave an idea for ful (pronounced as full apparently). I went on to find this recipe.

Chuck some oil in the saucepan.
Cook onions until translucent and then add garlic, cumin and cook for a bit then add fava beans with 1 Tall glass of water.  Cook for half an hour, or until the water is almost gone. Mash half of the fava beans to add texture. I served this with raw onion rings, chopped tomato and quarter red pepper chopped

We also had some ready made baba ganoush from Cortas too
While serving I added olive oil, lemon and garlic (half a clove)

This recipe was bit of an afterthought and more with the intention to finish up fresh 9 tomatoes and spinach from the fridge. I used this recipe as an inspiration.
So here you go –

Chop about 9 medium sized tomatoes quarter red pepper, and throw in the pot with 300 gym of roughly chopped spinach to stew for 10 mins.

In the meantime sautéed 1 chopped onion and one sliced garlic clove and added this in the mix after it is cooked. Then added salt, pepper and 4-5 heaped tablespoons of whole earth crunchy peanut butter.
Stew for another 15 minutes until you are happy with the consistency

One courgette
Half red pepper
One garlic clove sliced

Garlic & oil in pan, then add courgette (sliced), red peppers (diced) and then salt and 1teaspoon sumac powder. Cook until caramelised ( for 25 minutes or so)
Serve with pita brown and toasted and lemon juice on the side which can be added as per taste.