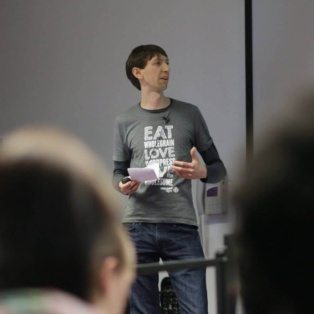 I have always searched for purpose in life and have always found purpose in wanting to make the world a better place. Despite this inner drive, I’ve never really engaged much in activities that I ever considered as activism. You wouldn’t find me at a march or chained to a railing or even wearing a t-shirt with a controversial message on it. “Activism,” I would always tell myself, “is just not really my thing.”

How I could I be so passionate about issues affecting our world and yet never have the guts to stand up and do anything about it?

The best excuse I could ever come up with is that I’m not convinced that protesting is the best way to change the world.  But now I can see my mistake.  In my head, activist was a synonym of protester.  I think most people think this way as it is generally described this way.

For example, the Cambridge English Dictionary describes activism as:

the doctrine or practice of vigorous action or involvement as a means of achieving political or other goals, sometimes by demonstrations, protests, etc.

This is misleading though.  Protesting is indeed a form of activism and certainly one of the most visible forms, but it is not the only form.

There are many ways that we can work to create a better world and anybody who takes action and actively takes steps to help create their vision of a better world is a true example of an activist.  The simplest form of activism therefore is to simply live by your own conscience and lead by example.

You don’t need to criticize others or sabotage a coal train. Just follow your own moral compass. Do what you believe is right and embrace opportunities for positive change.

It might not feel like you’re making an impact and you might not go down in history for it, but those small, constant ripples will gradually add up, often in ways that you could never plan. Every positive choice that you make is a step toward a better world and increases the chances of others following your lead in making their own positive choices, while the converse is true of negative choices.

Just because it might not look like you’re out there saving the world each day, it doesn’t mean that you’re not playing a valuable role in creating a positive future.