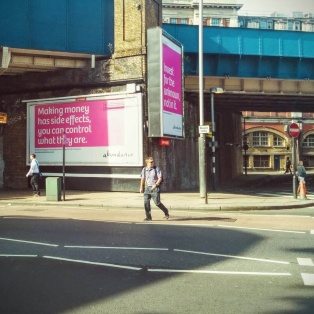 Is ethical investing an oxymoron?

As someone who cares a lot about social and environmental issues and is also fortunate enough to sometimes have some spare money, I often wonder what I should do with it: keep it in the bank, invest it in shares, or put it in a pension fund perhaps.

In reality, all three of these options will probably result in my money being invested in something else, so how can I ensure that it’s used for good?

Well, I could choose ethical bank accounts or ethical investment funds so that I have some confidence that they won’t invest my money in really bad things like war and tobacco, or I could hand pick shares in companies that I believe are positive and buy them on the stock market.

However, before I even start researching these options in detail, I have a much more significant concern, a concern that perhaps the stock markets themselves are intrinsically unethical.  Is the concept of ethical investment flawed when referring to the stock market?

What exactly is my problem?

On the surface, it might seem like I’m making a fuss out of nothing. In fact, one of my friends recently told me that I should think the opposite.  He explained that stock markets are inherently progressive and hugely democratic. This is because unlike in the days of big business lying entirely in the hands of a small, wealthy aristocratic elite, stock markets allow anyone to own part of a big company and reap the profits.

This is true to some extent, but I feel it misses the big picture.

So what’s wrong with stock markets?

Firstly, there’s the issue that it isn’t truly democratic because you need spare money to invest in the stock market. So while it is a step forward, it doesn’t help the poorest in society.

Secondly, stock market flotations are actually a tool for the super rich to become even wealthier by cashing in parts of their empires to the middle classes and inflating the value of the assets that they retain.

A shift in priorities

The big issue, however, is not either of these things. It’s that stock markets shift the priorities of a business away from the people affected by that business and turn them into machines that nearly always put the financial gain of the investor before almost anything else. Profits are more important than the welfare of staff, customers, suppliers, and the environment. Yet these profits don’t go to the people who have helped make the business successful or to pay the price of the environmental destruction caused by the company.

No, the profits go to a disparate group of anonymous people who have usually never done anything to contribute to the success of the business, and yet lay claim to the profits.

What did you do to deserve it?

When you buy shares on the stock market you are very rarely investing money into that business to help it survive and grow. Instead, you’re simply buying a voucher from a another anonymous person who gives you ownership of the future profits of the company… for the rest of time.

It’s not just what you do, but the way you do it

Democratizing the ownership and profit distribution of businesses is a conceptually good thing, but when you do it within a framework that’s structured to prioritize the wrong people, as stock markets are, then it becomes inherently destructive and regressive. Ethical investing is not just about investing in companies doing positive things, but about investing in a way where the profits you claim are fairly attributed to the value that you added to the organization and the people that it affects, not just yourself.

Ethical investing might not be a contradiction, but I think that ethical stock market investing is.