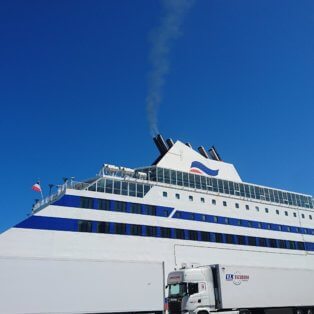 Is the ferry to Spain more eco-friendly than flying?

Recently we were on holiday in Northern Spain. We traveled by ferry this time because we didn’t have the time to take the train and we didn’t want to fly for environmental reasons. Plus, the ferry had the unique benefit of allowing us to take our electric car to Spain.

We hadn’t been on a ferry for a few years since we realised that the Eurotunnel offers a more eco-friendly option for crossing the Channel.  Eurotunnel was not a viable option this time as it was a short trip all the way down to Spain, and so the ferry seemed like a more practical option.  On the environmental side, Brittany Ferries claim that it’s the lowest carbon way to get there. They even have a video with Chris Packham endorsing their environmental credentials, so surely he wouldn’t endorse something unless it was true.

Once on the ferry however, a different reality dawned on me as I saw plumes of black smoke jetting out of the enormous funnels and the faint whiff of diesel particulates filling the upper decks. Has Chris Packham really thought this through, I wondered. Clearly, with so much blatant pollution coming out of the funnels, this cannot be considered an eco-friendly mode of transport, and there is much more than just CO2 being emitted.

Even leaving the soot and sulfur to one side and just looking at carbon emissions, is it really true that the ferry is more eco-friendly than flying?

What are the emissions from the ferry?

I looked for data about passenger emissions on the Brittany Ferries website, but could not find anything, so I emailed them to ask for the data that they use to justify their claim that it is one of the lowest carbon modes of transport. I got a nice reply back, see below, which even though it had some interesting information about how they optimise fuel efficiency, it didn’t actually provide any data regarding the emissions from their ships, let alone the specific journey from Portsmouth to Bilbao.  The closest it came was a generic EU figure for the external costs of various modes of freight transport.

Here is the reply in full:

As you are clearly aware from your question carbon dioxide is a major contributor to global warming and any form of transport that burns fossil fuel emits CO2.  Nonetheless, ferries overall are more CO2 efficient than many forms of transport.

Furthermore, Brittany Ferries’ operation is planned to minimise fuel consumption and the resulting CO2 emissions by reducing speed on overnight crossings. The effects of tides and the wind are harnessed to optimise fuel efficiency.

Also, all our ships are air-conditioned and by making these systems more efficient we have reduced CO2 emissions further.  In addition, the fleet has been retro-fitted with scrubbers which clean the oil particles before they are expelled via the funnels.  We are also the first cross channel ferry operator to build a ferry that is completely powered by LNG and the Honfleur will come into service next year.

You may also be interested to know that it is the policy of the EU to shift freight transport from the road to sea, rail and inland waterways. This means fewer trucks on the road and thus less congestion, less pollution, and more reliable and efficient transport of goods and Brittany Ferries is part of the EU’s “motorways of the seas” programme.

By mixing freight and passenger traffic, Brittany Ferries makes optimum use of the available capacity and this high level of efficiency reduces the environmental impact of the operation overall.

The EU has determined that the external costs (those representing the construction, operation and environmental costs of a form of transport to move 1 tonne a distance of 1 kilometre are:
• Road: 0.035 Euros • Rail: 0.015 Euros • Inland waterways: 0.010 Euros • Shipping: 0.009 Euros

Thus, shipping is by far the cleanest mode of transport and one that we are committed to furthering in the future.

I emailed back to request specific information about emissions for passengers traveling from Portsmouth to Bilbao, all of whom will have a car on board because this route does not allow foot passengers, and was told that they could only supply an average figure for all Brittany Ferries.  This figure is 0.1 kg CO2 equivalent per passenger kilometre. I checked the sailing distance on ports.com and found that Portsmouth to Bilbao is 1,216 kilometres (657 nautical miles) each way. A return trip for two people would therefore produce 486.4 kg of CO2 equivalent based on the figure provided by Brittany Ferries.

So how does that compare to flying?

The nearest equivalent flying route is Southampton to Bilbao. According to myclimate.org, the emissions for two people flying this route return would be 818 kg of CO2e.

Okay, so that looks pretty clear-cut. Emissions from flying are getting close to double those from the ferry, and on the ferry you get to take your car with you. So that is a pretty amazing win for the ferry.

But how accurate is this?

I have some concerns

Firstly, the figure from Brittany Ferries is extremely vague, and the fact that they seem resistant to release more specific figures when they almost certainly have the data makes me a little bit suspicious. We also don’t know what assumptions are made in this figure. Is it for foot passengers or car passengers? And if it is for car passengers, how many people does it assume are in each car? We simply have no idea.

Secondly, although Brittany Ferries are cagey about their data, I did find a report about Irish Ferries. This report states that the car ferries from the UK to Ireland produce approximately 1.13 kg CO2e per car kilometer.

With two of us in the car together doing a round trip of 2,432km on the ferry, two people on a return trip from Portsmouth to Bilbao would be 2748 kg of CO2 equivalent. That’s nearly 6 times the figure provided by Brittany Ferries, and significantly more than the figure that we have for flying.

Perhaps Brittany Ferries are much more efficient than Irish Ferries, but there’s no way that such an enormous difference in efficiency could exist in an industry where fuel is one of the main overheads.  Perhaps the report that I found about Irish Ferries is completely wrong, but it seems pretty well thought through and unlike Brittany Ferries, the data and assumptions are very transparent.

So I’m left confused. I think it’s fair to say that without accurate and transparent data there’s simply no way to know whether traveling by ferry has higher or lower emissions than flying.  It is probably reasonable to assume that both modes of transport are pretty terrible polluters.  Of course, traveling by ferry would be a lot more efficient as a foot passenger and so in some ways I am being unfair on the ferry, but what I really want is to just have transparent data so that passengers can make informed choices.  It seems that Brittany Ferries don’t want us to know the truth.

I gave it one last attempt and asked Brittany Ferries if they could provide me any information at all about the specific emissions or fuel consumption of the ship that we traveled on, the Cap Finisterre, or at least clarify the assumptions made in creating their generic emissions figure.

I received another very friendly but evasive email stating that “Having investigated your query, I am sorry but this is commercially sensitive information which we are not at liberty to divulge.”

My gut feeling is that the ferry industry knows how polluting their ships are and knows that they are probably as bad or worse than aviation for passenger transport, and so they are using data that favours shipping for freight transportation to make passenger ferries look clean and green.  That’s just my hunch.  Who knows the real answer?  Something tells me that its not Chris Packham.

Anyway, I think that next time I’ll try to make the time to travel by train.

But we did get to see a wind turbine factory!

On a slightly different note, one nice surprise of taking the ferry was that we got to see the wind turbine factory at the Port of Bilbao.  The scale of the turbines and operations is truly mind boggling!