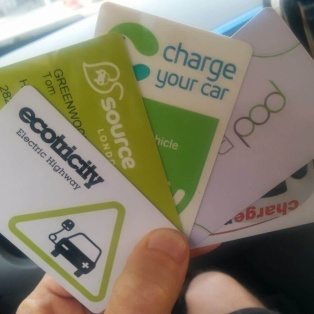 The electric car charging sector is still in its infancy but it is growing pretty fast. There is now quite a comprehensive network of chargers across much of the UK and many European countries.

I say network but I actually mean networks. Just like there are several chains of petrol stations, there are also a number of companies providing electric car chargers across the UK. However, unlike petrol stations, you need membership to access almost all of these chargers. On the surface this makes some sense because charger operators need a way to track who is using them and charge for their usage.

The problems with membership

The current membership models present some real practical problems such as:

If electric cars are going to become mainstream, then this is going to have to change.

At the moment, I have five membership cards for UK networks – Ecotricity, Source London, PodPoint, Chargemaster/Polar and Charge Your Car. I have only actually needed to use three of these cards so far, but now a load of chargers are appearing in in Hampshire (where I live) that I can’t access because they require yet another membership card.  This time for a company called Charge Point Genie, who have undoubtedly the worst user experience of any technology company I have seen in years.  It is as if they are trying hard to ensure that no one can figure out how to get access to their chargers, which is crazy considering that they are by far the most expensive chargers that I have seen anywhere in the UK.

If you want travel abroad in your electric car, then things get even more complicated. You’ll have to research networks in a foreign language and if you don’t have a valid address or bank account in each country, you won’t be able to get membership to some of the charging networks.

Combine this with the fact that that membership applications can take several days for your RFID cards to arrive and it makes spontaneous trips to new places almost impossible.  The whole process is far more complicated than it should be and it is only tolerated because the current generation of EV drivers are early adopters who will put up with some hassle in order to drive electric.  But it won’t be tolerated by the mass market and things need to change.

I think there are 2 solutions to these problems and they are both possible with current technology.

Firstly, we need the charge network operators to work together and share a common map and membership system. It’s fine to have lots of different operators and for them to compete with each other, but if the sector as a whole is going to be successful then they need to work together.

Luckily, this concept has already started to be implemented by a company called PlugSurfing. PlugSurfing is trying to get all of the charger operators to partner with them so that EV owners can find chargers on a single mobile app and use any of them without separate membership to each. You simply register via the PlugSurfing app and activate chargers using the app. You can also purchase an RFID key fob for a nominal fee for 9 euros, which is essential for some chargers, particularly those in underground car parks with no mobile reception. It’s the brain child of Adam Woolway and Jacob van Zonneveld who set up the company in Berlin, which is apparently one of Europe’s most progressive EV friendly cities. At present, PlugSurfing is unfortunately not available in the UK and covers a large proportion of the chargers in Germany, Holland, and Belgium. However, they have plans to keep expanding their reach across Europe and you can already use their app in the supported countries even if you have a UK address and credit card.

I used their app in Belgium this year. It really was a lifesaver as I not only found a charger that I didn’t know about but I could also use the charger via the PlugSurfing app, even though I didn’t have membership at the relevant charging network. Without it, our Renault Zoe could have been stranded in Belgium.

PlugSurfing is one of those rare businesses that is actually adding genuine value to society. I really hope that they are successful long term. In the UK, we desperately need it, so I hope they enter the UK market soon or that a similar UK-centric scheme is initiated.

Is there another solution?

The second solution that I think would work in parallel to something like PlugSurfing would be to allow customers to activate chargers via contactless debit and credit cards. Most major banks in the UK are now issuing contactless cards and it could be possible for chargers to be enabled so that they can take payment directly from the card used without requiring any membership. It would work exactly like the London Underground and the London buses do with ticketless travel via contactless bank cards. This would allow EV drivers to turn up at any charger and use it without having to worry about whether they have the correct membership. As an EV driver, I wouldn’t even mind if I was charged a nominal activation fee or charged a premium on the charging rates for using the charger as a guest so long as I have the convenience.

What I really want is the peace of mind that I can use any charger, anywhere, whenever I needed it.

Let’s hope the future is simple

There you have it, the membership model for electric car chargers in the UK and many other countries is pretty ridiculous at present but solutions are available. Great user experience is largely about eliminating barriers in the customer journey, yet the charger operators are putting barriers up that would simply not be tolerated in most other industries.

We need the various operators of the charging points to collaborate, think about user experience and do what is necessary to ensure the long term success of their own industry.