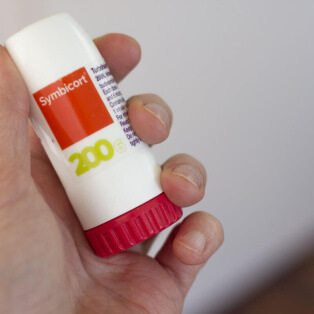 Do asthma inhalers cause weight gain?

For over 10 years, my wife has suffered from mild asthma that causes wheezing and shortness of breath, particularly during exercise or when the air is cold, damp, or polluted. A few years ago the doctor prescribed a new inhaler for “immediate relief” in addition to the preventative inhaler. This new one was called a Symbicort Turbuhaler.

Honestly speaking, she was never really reliable at following the doctor’s instructions for using the preventative inhaler and so that didn’t get used much. The Symbicort Turbuhaler however, was used many times a week (probably a couple of times per day) particularly during work outs. Around the same time, she started gaining some weight around her hips.  It wasn’t a massive amount of weight, but it was enough to frustrate her and there was no obvious cause for it at the time. Over the past few years, she’s worked her socks off trying to lose that bit of extra weight but nothing has ever really made any difference.

During this time, it has pained me to see her inhaling pharmaceuticals on a daily basis and I tried to encourage her to seek a natural and genuine solution for her asthma through methods such as a healthier diet, stress reduction, breathing exercises, and vitamin supplements. We certainly have had some noticeable success with these tactics but use of the prescribed inhalers remained as high as ever. Then a few months ago, I read about a trial on mice that found that lavender essential oil had a significant beneficial effect on the asthmatic mice. I purchased a set of empty nasal inhalers and I soaked each cotton wick with a different essential oil. I created inhalers with lavender oil, frankincense oil, peppermint oil, lemongrass oil, marjoram oil and eucalyptus oil (all from Neal’s Yard) so that we could compare and see which ones, if any, have an effect. It quickly became obvious that lavender and peppermint essential oils were having a positive effect. Within a few days, my wife agreed to try going to the gym with these inhalers instead of the ones prescribed. Guess what? It actually worked. She successfully completed her workouts and hasn’t touched the Symbicort Turbuhaler since.  Not only was she finally free of the pharmaceuticals but quickly gained a boost of self-confidence to do exercise without feeling dependent on drugs.

This was a fantastic result but then something really strange happened. Within just the first few days she had an urge to urinate a lot, which was a little worrying for a few days because there was no obvious reason for it.  Then after a week or two she noticed that she had lost weight around the hips. Nothing else in her lifestyle changed. The level of exercise remained steady and her diet remained the pretty normal. It is now two months later and with no other lifestyle changes she has lost 3.5kg and her clothes are now loose around her hips where they had not been for several years. This recent period actually included Christmas and a lot of eating out in restaurants, which you would expect to increase weight, yet her weight has dropped significantly from the time when she stopped using the inhalers.

Of course, this is purely anecdotal evidence but it’s made us feel strongly that the inhalers can cause weight gain as a side effect in some people (as it seems others have also discovered), so we wanted to share this in case it’s helpful to others struggling with asthma and the side effects of the prescribed drugs.

2 thoughts on “Do asthma inhalers cause weight gain?”