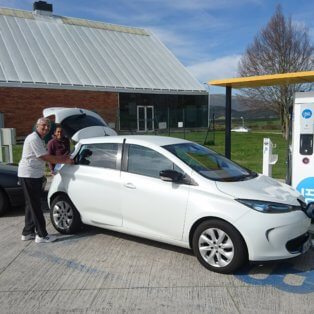 How difficult is it to charge an electric car in Northern Spain?

We’ve just returned from a short trip to Northern Spain. We took our Renault Zoe, on the ferry from Portsmouth to Bilbao and spent a few days visiting Bilbao, San Sebastian, Pamplona and Vitoria Gasteiz.

Before the trip, we were worried that it might be difficult or impossible to visit Spain with our Zoe because Spain currently doesn’t seem to have a lot of electric car chargers and past experience taught us that charging abroad can be a challenge if you don’t speak the language and don’t have a local bank account. My initial research seemed to show that travelling in Spain by electric car would be fairly easy if we had a Tesla, but somewhat more difficult in our 2014 Renault ZOE, with its 80 mile range and lack of access to the Tesla charging network. We came close to cancelling our plans when, just in the nick of time, I stumbled upon the IBIL charging network, which has a reasonable number of chargers across Spain. All of the information was in Spanish but with some help from Google Translate, I managed to order an RFID card a few weeks before our trip and register a credit card onto the mobile app.

How did the trip go?

As it turned out, the trip was incredibly easy. All of the chargers worked as they should and were available when we needed them. Despite being all in Spanish, the IBIL mobile app was intuitive and pretty easy to use. It even provided some interesting real time data so that we could monitor how the car was charging while out and about. Mostly we charged in towns on 3kW or 11kW chargers but we did also use a rapid charger at Zuasti service station near Pamplona.

One thing to be aware of is that the IBIL rapid chargers limit AC (40kW) charging to 30 minutes at a time. I’m not sure why because they charge for electricity and not time, so it would be in their interest to let people charge for longer. This did catch us out because we waited 40 minutes but only got 30 minutes of charging, which due to our ZOE only having about 80 miles of range, resulted in us having to make one extra trip back to stop at Zuasti on our way to Pamplona to add a few extra miles that we needed as a safety margin to get to Vitoria.

We didn’t use the reservation feature on the IBIL app as we were not too sure how it worked but fortunately we didn’t need it. We always found a charger available, which was in some ways a good thing and a bad thing. It was sad to see very few electric cars in Spain, although we did see quite a few electric government vehicles including 100% electric vans and buses in Bilbao.

The RFID card is not what it seems

As for the IBIL RFID card, it turns out that it does not take money from the credit card registered to the mobile app. Instead, it seems that it’s a prepaid card that you have to manually top up through the IBIL website. I hadn’t done this so our RFID card was essentially useless and so we used the mobile app everywhere. Amazingly, and fortunately, the mobile app worked even in underground car parks.  The only real downside of having to use the app is that it as a foreigner it requires us to use our mobile data while roaming.

The only issue that we encountered was at the end of our trip when we stopped for lunch at Bilbao at Twiggy’s Vegetarian Pintxos Bar. When we returned to the car ready to drive to the ferry, we could not disconnect our cable from the charger. The mobile app kept displaying an error when we tried to end our charging session. Luckily, Vineeta had the idea of using the RFID card to end our session and it actually worked! So it was worth having the RFID card after all.

How much did it cost?

We didn’t travel big distances but it was an easy and smooth trip overall. In total, we drove 336 miles, charged six times, all at IBIL chargers, and were charged a total of 48 euros for the 93 kilowatt hours of electricity that we used.  Taking off the energy that we had charged at home before we left, that averaged out at 0.16 euros per mile and 3.18 miles per kilowatt hour. Considering that this was mostly motorway driving, and some of it was fairly mountainous, it’s not too bad.

Would we do it again?

Overall we really enjoyed the journey and having our own electric car in Spain to travel with family was a real pleasure.  Charging was pretty easy in the locations that we visited but we are very aware that if we had tried to drive out into the more rural parts of Northern Spain then we would have found it almost impossible.  Overall it was a good trip that we would love to do again.  The only part that we didn’t particularly enjoy was the 24 hour ferry trip from Portsmouth to Bilbao, although even that went surprisingly quickly and the view on arrival in Spain was truly beautiful.