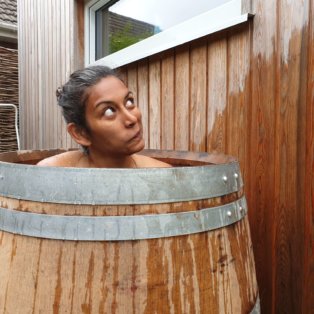 Breathing life into the vagus nerve

In Autumn 2018, we went on holiday to the Austrian alps. I had intentionally booked a hotel with its own swimming pond and a sauna because I was just starting to embrace cold water and I wanted to push myself a bit. We ended up swimming naked in lakes and even bathing in a cattle trough, but that’s another story.

What doesn’t kill us

While on the trip I stumbled upon the book “What doesn’t kill us” by Scott Carney. As an investigative journalist, he had set out to expose Wim Hof as a fraud but ended up training with him and experiencing the benefits of his technique first-hand. While reading the book, out of the blue, my brother messaged me saying “Have you heard of a guy called Wim Hof?”

Bizarrely, they were teaching Wim Hof’s method at the digital marketing conference that he was attending in Bali and he had just had his first experience of an ice bath. It seemed like the universe was trying to tell me something.

When we got home, I downloaded the Wim Hof app and we started doing the breathing exercises and some more cold water immersion over the following weeks.

Somehow the cold water stuck and became part of our daily routine even through the winter, perhaps because we could feel the immediate benefits to body and mind. However, the breathing technique felt unsettling at first and we didn’t understand the benefit of it, so we stopped it after a few weeks.

A weekend without Wim

Then at the beginning of 2020 I decided that I wanted to understand the whole technique in more depth, and so we signed up for a weekend with Wim in the Netherlands for April. This spurred us on to try the breathing technique again at home in preparation for the trip. Of course the event itself was cancelled due to COVID-19, but I’ve continued to do the breathing at home since January and have really felt the benefit.

I’ve become comfortable with the strange sensations that are experienced during the breathing sessions and I have found that it’s given me far greater mental clarity, especially on days when I need to start work early or I am otherwise feeling tired and stressed.

I’ve also found that it made me much more conscious of my breath and taught me to breathe with consciously with my diaphragm. This has particularly been noticeable while running, where I have focussed on breathing consciously at all times and found my park run times improving despite doing no more exercise than usual. Similarly, I found that it helped me improve my breathing while swimming, and conversely my ability to swim without breathing.

I also felt more resilience in my body, which even if only a psychological boost, has been a real asset in the shadow of COVID-19.

Someone recently sent me Stig Severinsen’s seven-day breath hold challenge. As four time world free diving champion, I figured he probably knows a thing or two about breathing so I decided to give it a go.

The idea of the challenge is to train yourself to increase your breath hold time by at least two-fold over a period of one week.

At first, I was honestly a bit disappointed that Stig Severinsen provided hardly any advice during the daily videos. Nevertheless, I did manage to increase the length of time that I could hold my breath in, from 2 minutes 39 seconds on day one to 5 minutes 6 seconds on day five, which is pretty close to double.

I actually stopped on day five as I wasn’t sure that I liked feeling of holding the breath in for such a long period of time, which is quite different from holding the breath out, as is usual with the Wim Hof breathing technique. However, I was satisfied that a breath hold of over five minutes was pretty epic for me, and I realised that I had actually learned more that I initially thought.

Stig’s essentially teaches you to relax, focussing on calming yourself and slowing your heart rate, and consciously relaxing the diaphragm. In effect, you are manually activating the mammalian dive reflex without being submerged in water. The more you do it, the easier it gets. The practice strengthens the vagus nerve and creates stronger conscious control over the bodies normally reflexive systems.

Soon after this challenge, hay fever season arrived. I’ve been working to cure my hay fever for a few years and I’ve made good progress through cleaning up my diet and learning how to reduce stress, but I’ve never completely got rid of it.

When I felt it coming on this spring, something different happened. Having learned to control diaphragmatic reflexes during breath holds, I decided to see if I could consciously override the sneeze reflexes triggered by hay fever. In trying to do this, I learned some interesting things about sneezes.

Firstly, I learned that sneezing doesn’t happen in the nose, but in the diaphragm. What we feel in the nose is a type of pleasurable itch that makes us want to let our diaphragmatic reflex rip.

The fact that sneezes feel so good, just like itches, is really important. It tells us that sneezing is not an unstoppable reflex, but a choice. Our body decides that we need to sneeze, and tempts us into it. The more I tried to control sneezes, the more I became aware of the dance that I was having with the sneeze itself. It would tempt me to embrace the feeling of the sneeze giving me a little sample, and the more I resisted, the greater the pleasure would build in my nose making me desperately want to surrender. It keeps tickling and saying “Go on, you know, you want to”!

I found that with this knowledge, I could in fact stop sneezes, not by brute force, but through the same principles taught by Stig Severinsen. Whenever I felt a sneeze coming on, I would take a slow deep breath in, then turn my attention away from the nose (where the itch is), and focus inwards on the diaphragm. Then I would calmly and assertively in my mind say “No!” to the sneeze and slowly breathe the tension out. It is incredibly empowering when you get it right, and the more I do it, the easier it gets. Sometimes the sneeze will try to come back several times, upping the intensity each time, but staying focussed and assertive will make it fade away.

I’ve found that the sneeze often feels like it cannot be stopped until it literally reaches its peak, and then if I stay focussed it suddenly evaporates at the point when it almost seems impossible to stop. The key seems to be to believe 100% that I will not sneeze, and to stop what I am doing to focus my complete attention inwards on calming the sneeze. If I falter on either of these two points then the sneeze tends to win, but if I maintain these then it nearly always works.

This has been a revelation during hayfever season, which at times can get a bit miserable and exhausting. I can still feel the hayfever allergy in the background and feel sneezes coming, but have been far less bothered by them as I have quickly gained confidence that I am in control. Even when the pollen count is really high and I have been struggling, its given me the mindset to calm my body down and reduce the affects.

One of the big lessons here is that sneezes are not just a symptom of the bodies allergic response, but actually stimulate the body to ramp up the allergic response further. This creates sneezing fits, or what I call “hayfever frenzy”. The same can actually be true of nose blowing, which if you are a trumpet blower like me is effectively a form of manually induced sneeze, and I have found that I’m much better offer avoiding it as far as possible.

This technique of consciously breathing away sneezes seems to calm the immune response and reduce the overall allergic response within me.

We bought a wine barrel

The ability to control sneezes gave me greater confidence over my ability to consciously control my body and therefore to immerse myself in cold water. And so we bought an empty wine barrel to put in the garden and fill with cold water. We’ve been in nearly every day for a month now, for at least 2 minutes each time.

Scott Carney described the concept of driving a wedge into our reflexive pathways, to open a crack through which the conscious mind could take control. I didn’t quite understand what he was talking about, but through the breathing exercises this year and the recent sneeze experiment, I now intuitively understand what he means. I’ve been able to bring this concept with me into cold water, relax into it, calm my breath and take conscious control over my body, calming any shivers, keeping my heart rate slow and warming my body from within.

It’s very hard to explain, but when it clicks, it intuitively makes sense and feels incredibly empowering.

Bringing all of this experience together, I see a much clearer picture. When we practice consciously overriding our reflexes on a regular basis, we strengthen the mind body connection through the vagus nerve. In doing so, we strengthen our mental pathways that allow our mind to control our bodies.

Vagus nerve condition is increasingly being identified as a key factor in health and athletic performance. It indicates the degree to which our brain is able to precisely control of our bodily functions and therefore its ability to maintain homeostasis, putting our bodies in balance.

It’s much like a team which performs better with a strong, clear leader than with weak and vague leadership. When we train our vagus nerve and our mental ability to control our own reflexive actions, we are training to make both our conscious and sub-conscious mind better leaders in the pursuit of health. When we have poor vagus nerve condition and mental condition, our bodies can still function autonomously, but a lot of fine detail is lost in the optimisation of our bodily systems, leading eventually to poor health.

We often think of health as being related to the strength of our immune systems, but strength isn’t everything. Power without control is equally dangerous and this can be seen in health conditions such as allergies and auto-immune disorders, where the problem is not that the immune system is too weak, but that it is out of control.

By training the conscious breathe and strengthening the vagus nerve, we are helping our mind’s take back control of the immune system to restore order and balance. Learning how to stop a sneeze is just the tip of the iceberg.